In Turkey, The only B2B CNC Digital Plattform Parkurda.com is Appreciated to SILVER MIXX Award

The 11th International MIXX AWARDS winners announced, organized by the IAB. In the "THE MOST SUCCESSFUL IN DIGITAL WORK AND BREAKING MOLD" competition, where the projects of 780 global brands are evaluated; Through the projects which look to the future with hope and keep changed human needs at the center, Parkurda is appreciated to SILVER MIXX award in B2B category. 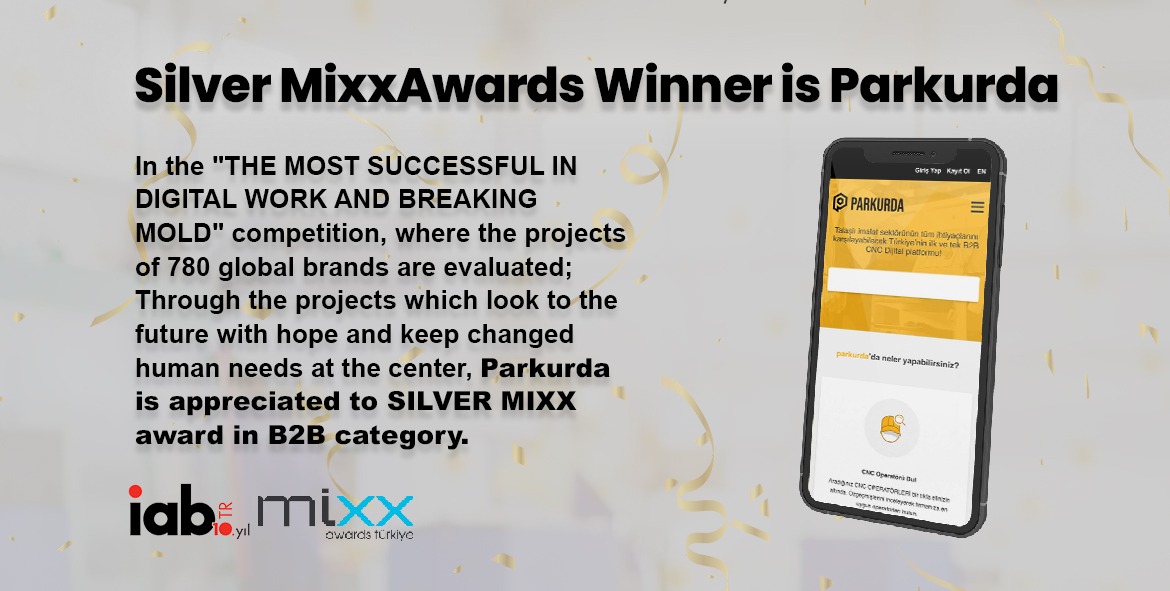 Parkurda.com, which is designed by Turkey’s technology partner TEZMAKSAN, achieved a significant success in the MIXX Awards 2021, the world's most important event in the digital field. Parkurda.com platform, which was created by Tezmaksan, became the silver winner that developed award advertising in the competition where teams and brands that developed digital advertising were awarded. Parkurda.com brings together those who want to do contractual business enables B2B meetings on the internet. In the category where 35 percent strategy, 30 percent creativity and innovation, 35 percent business results are evaluated, the rate of realization of the business in line with the campaign goal and the increase in the values for the business results are based on. With projects that look to the future with hope and keep changing human needs at the center, Parkurda is awarded SILVER MIXX in the B2B category. The goal of Tezmaksan on parkurda.com, which has created a transaction volume of 450 thousand TL until today; Reaching 40 thousand SMEs. It also offers parkurda.co Turkey's contribution to the exports, which broadcast in Europe. In addition, the sectors that post the most contract job advertisements on parkurda.com are defense, metal, iron and steel, machinery manufacturing, metal processing and automotive, respectively.

Tezmaksan's parkurda.com for the use of the machining sector in the last quarter of 2020 brings together those who want to take contract jobs and those who want to give contract jobs with its reliable infrastructure that offers a new generation of work space and allows B2B negotiations. Tezmaksan's goal is to create a transaction volume of TL 450,000 through parkurda.com to date; To reach 40,000 SMEs. The parkurda.com, which is also broadcasting in Europe, also contributes to Turkey's exports. In addition, the sectors that publish the most contract job advertisements through parkurda.com stand out as defense, metal, iron and steel, machinery manufacturing, metalworking and automotive respectively.